The Container vessel SCI Mumbai with overall length of 262 metres has a capacity to carry 4395 TEUs of containers. The vessel SCI Mumbai is one of the vessels in the PIX 2 service, calling Tuticorin at a frequency of 28 days and its rotation is Tuticorin -Cochin – Jebel Ali – Mundra- Krishnapatnam – Kattupalli -Tuticorin.

Mr I. Jeyakumar, IRTS, Chairman, V.O. Chidambaranar Port, stated that earlier in V.O.Chidambaranar Port, vessels with length over all of 230 metres with container carrying capacity of 2500 TEUs were calling this Port . The humble start of this trial run with container carrying capacity of 4395 TEUs and length over all of 262 metres would pave way for attracting more International and coastal volumes and would also induce the main line operators offering services from Far East, Red Sea and East Africa to call

V.O.Chidambaranar Port. He further added that these services would be the game changer in container business in this part of the country creating new opportunities and delivering cost efficient services to customers.

In V.O. Chidambaranar Port, the record of handling the longest Container vessel happened 11 years back on 01 November 2006. Round The World (RTW) service vessel M.V. Limari, with an overall length of 269 metres made its first call at Tuticorin offering direct calls to Europe, Mediterranean countries, China and USA placed V.O. Chidambaranar Port in the international chart of the container trade.

It’s a matter of pride that V.O. Chidambaranar Port, the vibrant seaport of South India ranks fourth amongst the Indian Major Ports in terms of container handling. 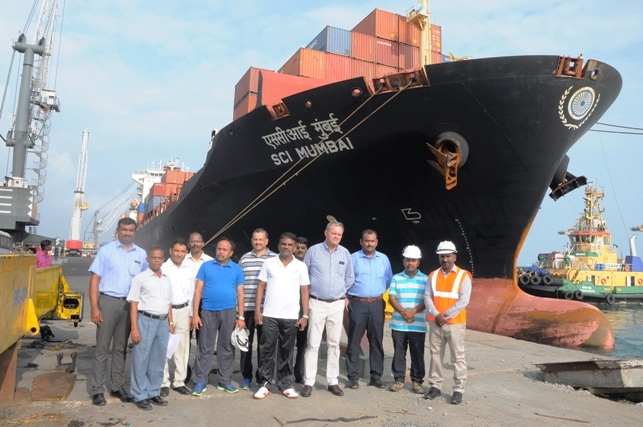 In order to cope up with the Container traffic forecast of 3.28 Million TEUs by the year 2025-26, plans are on the anvil by the Port to deepen the Harbour Basin’s approach channel to facilitate draft of 15.20 metres (12.80m present draft), modify the harbor entrance to 230 metres (153m present width), strengthen the berths 1 to 6 and convert the berths 3 and 4 as Container Terminal to handle Very Large Container Carriers (VLCC) up to 14000 TEUs capacity.