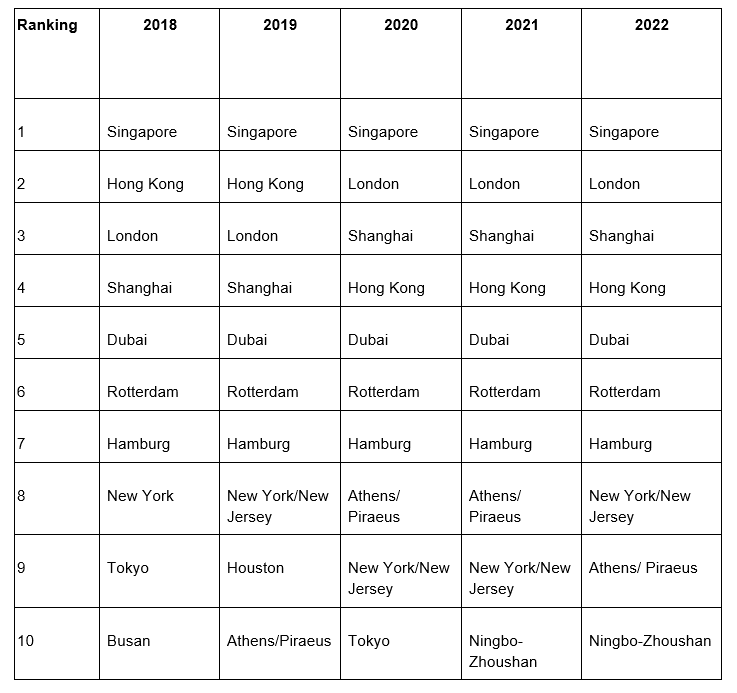 Singapore has secured the top spot once again in the Xinhua-Baltic International Shipping Centre Development Index Report. It is the ninth consecutive year that the report – published jointly by Chinese state news agency, Xinhua, and global maritime data provider, the Baltic Exchange – has ranked Singapore as the global leading maritime centre.

The city state scored 94.88 out of a possible 100 points, whilst second on the list was maritime professional services stronghold, London, with 83.04 points. Meanwhile, Shanghai, home to the world’s largest port, takes third place with 82.79 points.

Singapore has earned its longstanding spot at the top of this index due to its wide and established ecosystem of professional global maritime services, good governance, ease of doing business and large and strategically situated port.

This year, however, New York/ New Jersey overtook Athens/ Piraeus to take the eighth place on the list, due to its port’s exceptionally strong TEU uptick in 2021, as logistics companies moved goods through the US east coast port to avoid congestion on the US west coast.

Like last year, the Chinese port of Ningbo-Zhoushan comes in tenth. Its place in this list is almost entirely due to it being the third busiest port in the world in terms of cargo handling, following Singapore and Shanghai.

Singapore leads the rankings for the ninth year followed by London, Shanghai, Hong Kong and Dubai

Location still matters, as does ease of doing business and access to professional maritime services

New York/ New Jersey moved up one place to number eight, due to an increase of TEUs handled as cargoes were re-routed from US west coast ports

A total of 43 maritime locations were rated as part of this report, which considers port factors including cargo throughput, number of cranes, length of container berths and port draught; number of players in professional maritime support businesses such as shipbroking, ship management, ship financing, insurance and law as well as hull underwriting premiums; and general business environment factors such as customs tariffs, extent of electronic government services and logistics performance.

Baltic Exchange Chief Executive Mark Jackson said: “This report serves as a valuable reminder of how intrinsic shipping is to global trade and prosperity. It also illustrates that shipping does not exist in silos. The success of the maritime hubs included in the top ten list has for the most part been borne out of collaboration and synergies across different sectors of the shipping industry. The Xinhua-Baltic International Shipping Centre Development Index shows that a successful shipping centre provides everything that the international shipowner might need, and a successful shipping centre is ultimately also a successful global city.”

Xu Yuchang of China Economic Information Service, a subsidiary of Xinhua, said: “The China Economic Information Service is delighted to present the 2022 Xinhua-Baltic International Shipping Centre Development Index Report. This is the ninth report that we have produced alongside the Baltic Exchange, which offers a window into the shipping industry, its drivers and its challenges and plans going forward. The 2022 report highlights that innovation and digitalisation will be essential for maritime success over the next decade. It also shows how flexible and resilient global supply chains can be when confronted with challenges. Importantly, it underscores how central shipping is to the global economy.”

Chief Executive of the Maritime and Port Authority of Singapore, Ms Quah Ley Hoon, said: “We are very honoured that Singapore is ranked top for the ninth consecutive year by the highly regarded Xinhua-Baltic International Shipping Centre Development Index Report. It is a reflection of the strong tripartite partnership with our partners, industry players, and unions in Maritime Singapore.  During the pandemic, we are also reminded of the global nature of shipping and the need for close collaborations to address global challenges such as crew change. As the maritime sector continues to build up resilience and future-ready capability, we will continue to work with our maritime colleagues around the world to drive transformation, particularly in the areas of decarbonisation, digitalisation, and talent development.”

Xinhua-Baltic International Shipping Centre Development Index was launched in 2014 as a collaboration between the Baltic Exchange, the only independent source of global maritime market information, and Xinhua, the Chinese state news agency. The index, in its ninth edition, provides an annual independent ranking of the performance of the world’s largest cities that offer port and shipping business services.

The Baltic Exchange is the world’s only independent source of maritime market information for the trading and settlement of physical and derivative contracts. Its international community of over 600 members encompasses the majority of world shipping interests and commits to a code of business conduct overseen by the Baltic.

Baltic Exchange members are responsible for a large proportion of all dry cargo and tanker fixtures as well as the sale and purchase of merchant vessels.

In November 2016, the Baltic Exchange was acquired by Singapore Exchange (“SGX”), bringing together complementary strengths of Singapore and London, two of the world’s most important maritime centres. Chennai: Port Wings News Network: The Board of Directors of the CMA CGM Group, a …