The Federation of Freight Forwarders’ Associations in India (FFFAI) in its 58th Annual General Meeting (AGM) held on 24 September in Mumbai, elected new Office Bearers of the Executive Committee for the year 2021-23. Mr Shankar Shinde the then Chairman-Elect for the year 2019-21, has taken over as Chairman, FFFAI for the ensuing two years’ tenure. He is also elected Managing Director on IFCBA (International Federation of Custom Brokers Association).

The elected Office Bearers are:

FFFAI is an Apex body of Customs Brokers Association and Freight Forwarders in India with the membership of 28 Customs Brokers Associations as Ordinary members and more than 6500 Associate & Allied members in India. FFFAI, held its AGM for the term 2020-2021 along with the elections of Office Bearers for the term 2021-23. The Presidents of respective Associations along with the nominees of the Associations attended the AGM from across the country to discuss on various issues and future road map for the betterment of the fraternity.

The newly Elected Chairman of FFFAI, Mr. Shankar Shinde, mentioned that it’s a proud moment for FFFAI to complete its successful 59 years of services to trade and marching towards 60 years Diamond Jubilee celebration. He emphasized on the importance and effective role of FFFAI in facilitating the foreign trade of the Nation. He unveiled his vision and commitments of FFFAI towards Customs Brokers and their role in International Supply Chain. According to Mr. Shinde, one of the priorities would be to empower the customs brokers by enhancing Skill development, Training, increasing their role in Logistic Sector, diversification with forward and backward integration. During the Welcome speech the FFFAI Chairman informed that FFFAI is great platform for Members as the Federation is providing inputs to various Ministries such as Ministry of Revenue, Ministry of Commerce & Industry, Ministry of Shipping, and Ministry of Civil Aviation. He further envisioned that Logistics sector will play a bigger role in next few years with the increased Industrial and infrastructure activity in the country. Mr. Shinde also assured full cooperation to the Government/policy makers in the interest of trade facilitation and ease of doing business to strengthen the country’s economy and achieving the government’s ambitious USD 400 Billion export target. 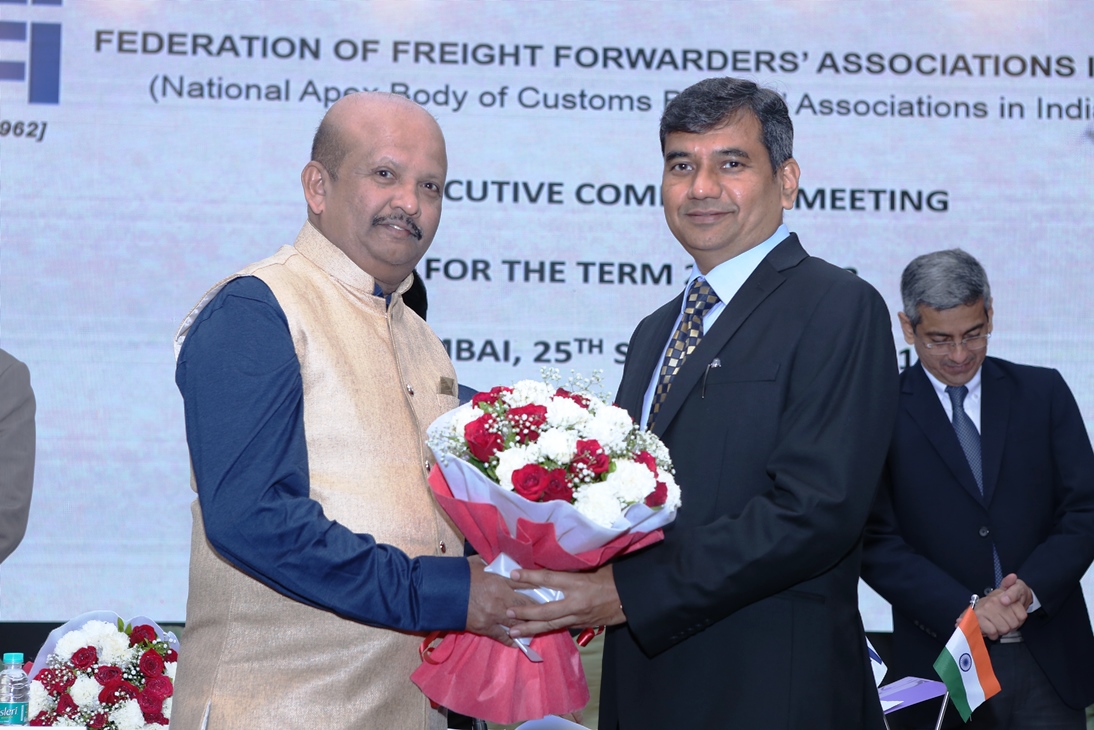 The FFFAI Chairman also informed that CBIC chairman Mr. Ajit Kumar in his message to FFFAI acknowledged the role of FFFAI as an important stakeholder in partnering with CBIC for trade facilitation measures on providing inputs and implementation of Policies. He further acknowledged the role of FFFAI and its members during COVID 19 Pandemic to maintain seamless supply chain of essential commodities in the country.

At this AGM the members highly appreciated the activities of the Executive Committee under the  Leadership of Mr. A V Vijaykumar as Chairman, FFFAI during the Term (2019-2021). In his address Mr. A V Vijaykumar expressed gratitude to the Executive Committee as well as all FFFAI members for their efforts and support for sailing through many hurdles and achieved many successes for the entire Customs Brokers and Logistics Service Providers community, despite huge difficulties due to catastrophic pandemic situation

FFFAI is the only Association member of IFCBA (International Federation of Customs Brokers Association), which enjoys the participation role in World Customs Organization (WCO). IFCBA is part of PSCG (Private Sector Consultative Group) to provide international perspective and addresses members concern on International laws, regulations and best practices to be adopted for seamless international supply chain.

Government of India had nominated FFFAI to be part of its two major initiatives INSTC (International North South Transport Corridor) and TIR Convention (Transports Internationaux Routiers i.e International Road Transport). The Customs Convention on International Transport of Goods under Cover of TIR Carnets, 1975 is an international transit system under the auspices of the United Nations Economic Commission for Europe (UNECE). FFFAI represents on behalf of the Ministry of Commerce & Industry and Ministry of External Affairs and enjoys permanent advisory status on the Coordination Council of INSTC Convention.

FFFAI has also been appointed on the Advisory Board of the Ministry of Civil Aviation.

Mr. Shinde further pointed out that Customs Brokers will always play an important role in International Supply Chain managements and would work with Customs and CBIC Board providing inputs and solution on policies, procedures, regulations for seamless movement of EXIM trade for achieving their benchmark in Ease of doing business and LPI (Logistics Performance Index).

He emphasized that FFFAI is very good platform for networking, as during the Biennial Convention there are huge participation from across India and International Logistics Service Providers. It provides an opportunity to its members for business development, due to the stakeholders’ participation in large numbers.

Mr. Shinde appealed to the fraternity to strengthen the FFFAI by participating and subscribing to its Membership to avail benefits and support the Logistic industry to achieve greater height.

He also stated that FFFAI would help to upskill its members to cope up with latest changes and technologies for creating environment of growth. He highlighted that the social media is also playing an important role and members need to be active on such social media platform for their business growth.

He thanked the Presidents and members of the FFFAI Member Associations for their active participation and continuous support to the Federation.

In his concluding remarks the FFFAI Chairman appealed to Customs Brokers and Logistics Service Providers to strengthen FFFAI by participating through its membership programme.