Larsen & Toubro launched the Lead Offshore Patrol Vessel (OPV) of a series of seven OPVs for the Indian Coast Guard on 27 October.

Entirely designed in-house, from concept, this is the first OPV class vessel for the Indian Coast Guard that has been built by a private sector yard in a record time frame.

L&T was entrusted by the Ministry of Defence in Mar 2015 to design and build seven OPVs for an order value of Rs. 1432 Crores. The order stipulated delivery of the first OPV within 36 months from signing of the contract, i.e., by Mar-2018 and subsequent vessels at intervals of 6 months. However, with the construction of multiple OPVs progressing on or ahead of schedule, all are planned to be delivered ahead of the contracted delivery dates. 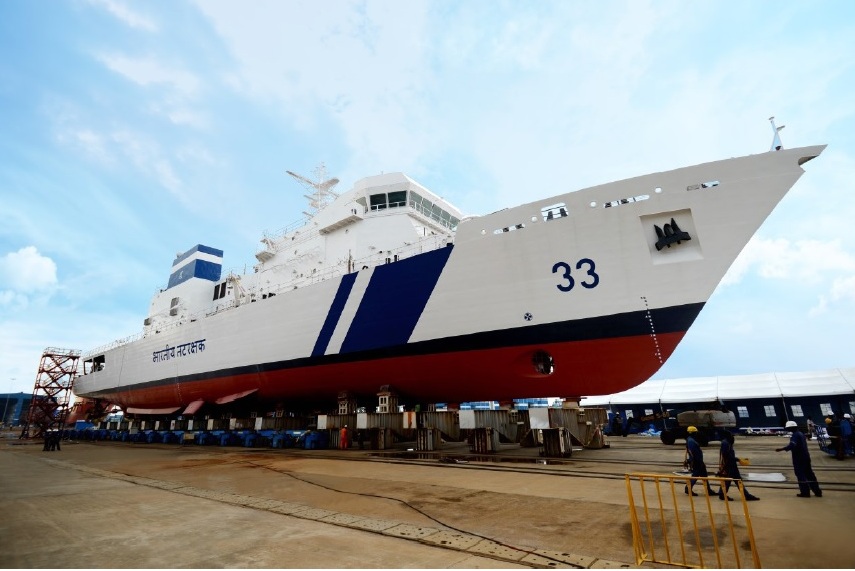 The vessel is 97m long, 15m wide, has 3.6m draught, 2140 T displacement with a range of 5000 NM, and is built to attain sustained speeds of up to 26 knots. The entire design and construction processes have undergone dual certification from the American Bureau of Shipping and Indian Registrar of Shipping and the project is being overseen by the Indian Coast Guard’s resident team at Kattupalli shipyard.

Having been built with modern methods and the build strategy of construction on land and launch through ship lift, on launch the OPV would be put through a series of Harbour and Sea Acceptance Trials before delivery to the Indian Coast Guard. Once commissioned, it would significantly enhance the coastal patrolling capabilities of the Indian Coast Guard. 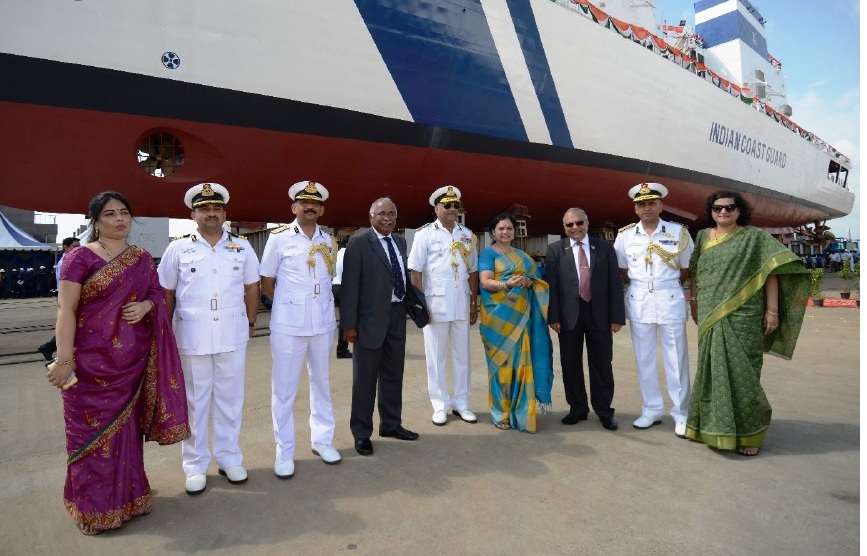 Commenting on the launch, Mr. S.N. Subrahmanyan, CEO & Managing Director, Larsen & Toubro, said: “This launch is a reaffirmation of our credentials in the ship-building space as this is our third major mandate form the Indian Coast Guard under relationship that began with a contract for 36 Interceptor Boats followed by a repeat contract for 18 more Interceptor Boats. It is also heartening to note that our team has overcome all challenges to remain ahead of contractual schedules for all the mandates. A total of 34 of those Interceptors Boats has already been delivered well ahead of contractual delivery schedule, and the remaining boats have been constructed and ready for delivery. The timely launch of the first OPV following that of the Floating Dock (FDN-2) for Indian Navy in June 2017, reaffirms our ability to execute and deliver multiple complex projects on time. With a favourable policy environment and government’s thrust on ‘Make in India’, we expect our contribution in indigenous Defence manufacturing to grow manifold in the coming years.” Mr. Subrahmanyan added.

Mr. Jayant Patil said: “With L&T’s ethos of Nation building we have been a part of National initiatives across strategic sectors and core sectors of the economy and we stay committed to strengthening the nation’s armed forces. This is reflected in the heavy investments made by us in building state-of-the-art facilities for defence manufacturing. The launch of the lead OPV designed and built in house is a big leap towards the country’s self-reliance in Defence. With a long term commitment to the defence sector, L&T has been a part of Navy’s Indigenisation initiatives over the past three decades and has developed weapon systems, fire control systems, propulsion equipment and systems, engineering equipment and systems, sensors, controls and platform management systems to maximize indigenous content of our war-going vessels”.

“Once again, L&T has achieved the distinction of launching the lead ship of a new class of defence vessel on time. Large scale deployment of digital technologies, proven expertise in complex project management, maximization of indigenous equipment & systems and a rich pool of skilled human resources have enabled construction to be completed on schedule,” said, Vice Admiral B. Kannan (Retd). “This reaffirms L&T’s capabilities to execute and deliver complex Defence projects on time using Indian design, indigenous technologies and construction skills.”

L&T was mandated by the Indian Navy to design and build Floating Dock (FDN-2) for the Indian Navy. The dock has undergone post launch trials at Kattupalli Shipyard and will be delivered shortly at Port Blair, suiting the Navy’s requirements.

In addition to new-build defence ships, L&T is also undertaking Medium Refit (MR) and repairs of Naval and Coast Guard ships. Currently, INS Darshak, a Naval Survey Vessel, is undergoing refit at Kattupalli shipyard. L&T has delivered six refit Defence ships (including the largest logistics tanker ship INS Jyoti) from Kattupalli shipyard so far. The shipyard was designed and built for concurrent construction of a variety of Defence ships as well as to undertake refits. The Offshore Patrol Vessel handed over to the Indian Coast Guard.