To commemorate the third anniversary of “Swachh Bharat Mission”, the “Swachhta Hi Sewa” was observed in Kamarajar Port Limited (KPL) from 15 September 2017 to 02 October 2017.

During the period, Kamarajar Port has carried out various cleanliness activities to create cleanliness awareness among the employees of the port, as well as the public of those villages surrounding the port and students of various schools located in the vicinity of the facility. 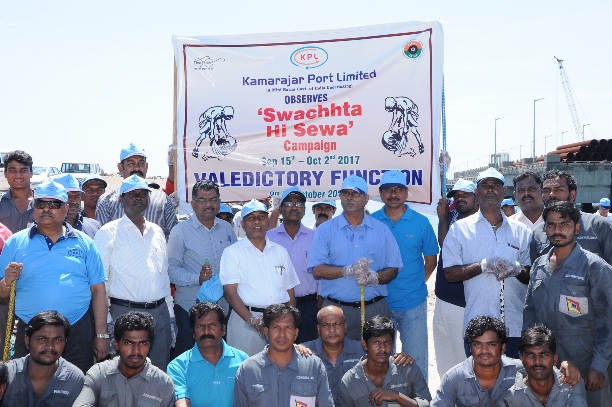 According to a media statement, the observation commenced on 15 September with an introductory speech by Mr V.Krishnasamy, General Manager (Operations), KPL, about the cleanliness awareness and the activities of the observation of “Swachhta Hi Sewa” campaign.

A “Swatchh Oath” was administered to all the employees to dedicate themselves in the cleanliness activities and communicate the importance of cleanliness to achieve the Prime Minister of India’s target of “Clean India” by 2019.

The port area was divided into different segments and the activities like cleaning, weeding out old records & disposal of furniture & scrap, renovation of toilets, painting the buildings, cleaning the roads, removing the unwanted vegetation, removing the garbages, cleaning and beautification of parks and beach cleaning are carried regularly from during the campaign.

On 02 October, coastal cleanup day was organised in the North Breakwater area. The senior officers of the port, employees, CISF, Fire Service team, BOT Operators, stakeholders around 250 members actively participated in the event.