Commerce and Industry Minister, Suresh Prabhu, attended an Informal Gathering of World Trade Organisation (WTO) Ministers in Paris on 31 May 2018.Twenty-Eight member countries of the WTO and the Director General of the WTO attended the informal meeting.

In his intervention, the Minister observed that there were already a number of Ministerial mandates to guide work at the WTO and negotiators have been working for years on many issues.  He said that work should be resumed based on existing mandates, Declarations and decisions, expressing the belief that it would be counterproductive and harmful to the system to ignore the Ministerial mandates and all the work done so far and re-set the negotiations.

He emphasized that political engagement in the process was critical for moving forward and drew attention to the informal gathering hosted in New Delhi in March this year. He mentioned that almost all the participants at the New Delhi meeting were of the view that greater engagement was the only way forward.

The Minister cautioned that while some countries viewed plurilateral discussions as a stepping stone to multilateral agreements, such initiatives could, on the contrary, weaken the multilateral trading system and undermine the inclusive institutional structure of the WTO.

Suresh Prabhu pointed out that there is a Work Programme for E-commerce which provides a forum for discussion within the WTO. He said that India has been actively engaging in this even though it is premature to discuss binding multilateral rules for E-commerce.

Observing that the WTO already has a full agenda, he said that India has reservations about the introduction of new issues such as Investment Facilitation in the WTO lest fundamental issues in agriculture and development get neglected.

Mr. Prabhu stressed the need to work together quickly to address the challenges which the WTO is facing at present. This would mean maintaining and strengthening the basic principles of inclusiveness, decision-making based on consensus and the centrality of development in the negotiations and processes.

Stating that trade must contribute to development, he said that governments in India and many other developing countries have to accord priority to addressing the challenges in the journey towards greater trade liberalisation and global integration. He cautioned that any endeavour at the WTO for reciprocal trade rules, which ignored this reality, would further deepen the divide and aggravate the disenchantment with globalisation. 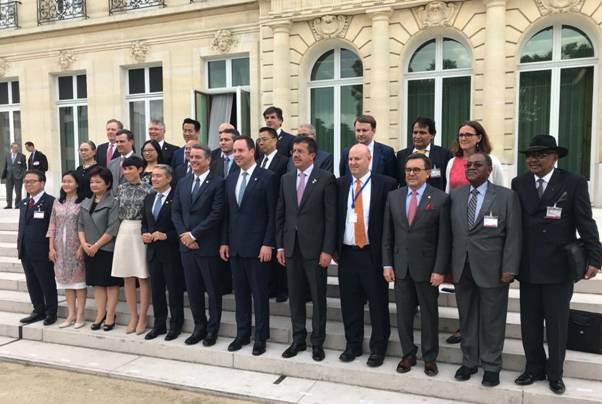 He said that special and differential treatment provisions for all developing countries, without exception, and LDCs are an integral part of the WTO Agreement and this principle must be protected in future agreements as well.

Observing that the dispute settlement arm of the WTO was the central pillar in providing security and predictability to the system, he urged members to commence the selection process to fill the vacancies in the Appellate Body.

On the recent cycle of unilateral trade measures and proposed counter measures,the Minster said that actions and counter actions such as this could stop the fragile global economic recovery in its tracks, with consequences for jobs, GDP growth and development that would harm everyone and could also irrevocably damage the rules-based multilateral system built up with hard work over many years. Instead of using such actions to deal with any inadequacy or unfairness in the WTO provisions, the best course of action would be deal with such issues within the WTO, he said.

In conclusion, Suresh Prabhu expressed the view that such informal engagement at the political level could go a long way in deepening a mutual understanding of issues and concerns and finding ways of moving forward.

During his visit to Paris, the Commerce Minister also had meetings with the Australian Minister for Trade, Tourism and Investment and the EU Trade Commissioner, during which various bilateral issues and ongoing trade negotiations were discussed. He also met the DG WTO and discussed the current international situation arising from various unilateral trade actions and counter actions and the challenges facing the WTO.

Government To Start 24 hours “Helpline” for Assistance to Exporters and Resolution of Issues: Piyush Goyal