In 2018, CMA CGM is celebrating its 40th anniversary and the unique adventure of a family company with strong human values. On this occasion, the Group unveils its anniversary logo and launches a series of global projects, which will represent an opportunity to recall the Group’s saga since its creation in 1978.

On the occasion of its 40th anniversary, CMA CGM has decided to combine the elements of the past with those of the present and the future to create a powerful and dynamic logo that reflects its history and values.

The various elements of the logo recall: –the maritime reference, heart of the Group’s activity, and the development in logistics, past and present with the historic logo of 1978, the current logo and the CMA CGM Tower, the Group’s headquarters in Marseilles (France), the Group’s international dimension, in particular its historical ties with China, the future with digitalization and space, a reference to the Shipping, and the “Future strategy” implemented by Rodolphe Saadé, CMA CGM Group’s Chairman and CEO.

As part of its 40th anniversary, the Group launches a program of worldwide actions that will take place throughout 2018, for both its employees and the public: the creation, at the CMA CGM Tower, of an interactive and digital museum linking the past and the future, a film and an illustrated book tracing the history of the Group, the inauguration of the largest container ship flying the French flag, the CMA CGM ANTOINE DE SAINT EXUPERY, and specific events in CMA CGM offices around the world. 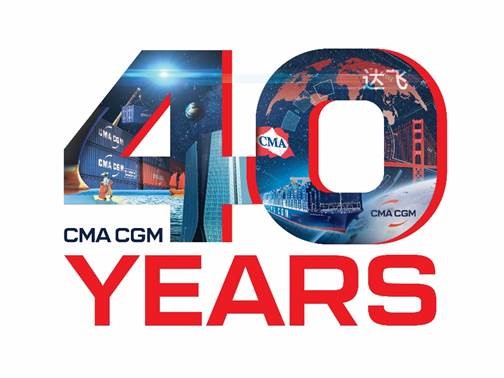