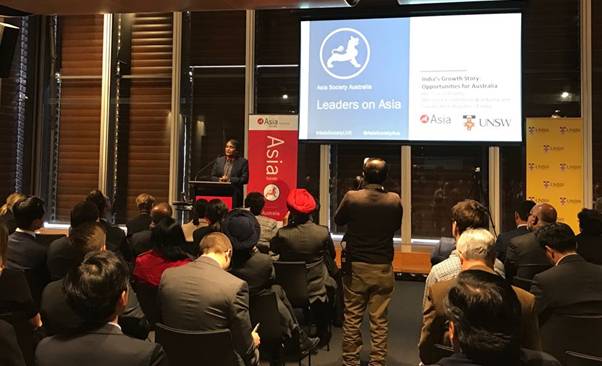 The 15th India-Australia Joint Ministerial Commission (JMC) was held on 25th June 2018, in Canberra, Australia.  The meeting was jointly chaired by Minister of Commerce & Industry and Civil Aviation, Suresh Prabhu and Australian Minister for Trade, Tourism and Investment Steven Ciobo.

The JMC took place after a gap of 4 years in a very warm and cordial atmosphere. The Ministers discussed at length on ways to increase two-way investment flows between the two countries. In this regard, both sides agreed to have greater collaboration between Austrade, the Australian Trade and Investment Commission and Invest-India, which is the National Investment Promotion and Facilitation Agency of India. The talks culminated in the signing of a MoU between Austrade and Invest-India in order to facilitate bilateral investment flows.

In Canberra, the Commerce Minister called on the Prime Minister of Australia, Malcolm Turnbull. He also had extensive bilateral meetings with the Treasurer, Government of Australia, Scott Morrison, David Littleproud, Australian Minister for Agriculture and Water Resources and Minister for Foreign Affairs, Julie Bishop. All the meetings were very cordial where matters of mutual interest were discussed.

In the second leg of his visit today, in Sydney, the Commerce Minister addressed representatives of about 25 Australian Superfunds, who have huge investible assets and the Minister informed them about the work being done in transforming and reforming India and about the many investment opportunities that are being generated for investors.

He focussed on structural changes such as the introduction of the Goods and Services Tax (GST), shifting of informal sector resources to the formal sector through financial inclusion and increased digitalisation and the measures being taken in making the processes of doing business in India easier. He mentioned that the high growth of the Indian economy has largely been driven by the private sector and invited the Australian Superfunds to invest in India.

Investment opportunities in various infrastructure projects such as industrial corridors, ports, smart cities, airports and railway projects were highlighted by him. This was followed by further presentations by Invest-India and Delhi-Mumbai Industrial Corridor Development Corporation (DMICDC) on details of specific investment projects that Australian Superfunds may invest in.

The Minister delivered the “Leaders on Asia” address at the Asia Society, Australia, on the topic “India’s growth story: Opportunities for Australia”, to a hall packed with members of academia, government and business. In his address, Suresh Prabhu mentioned the sectors of knowledge-based agriculture, services, education and manufacturing as the key areas of mutual cooperation between the India and Australia. He stressed that economic interdependence is the best way to further relationships between countries and India and Australia are natural partners who can build such interdependence and leverage each other’s economic advantages.

Suresh Prabhu also met leaders of the Indian diaspora in Sydney today. During the interaction, he highlighted the major reforms being undertaken in India and he emphasised the positive contributions of Indian Diaspora not only to Australia but also to India.

During this successful visit to Australia, Commerce Minister met with important stakeholders in the Government, business and opinion makers. All meetings were conducted in a friendly environment with positive outcomes for both countries.

Comprehensive CEPA Will Result in Greater Utilization From Both Sides: FIEO Chief