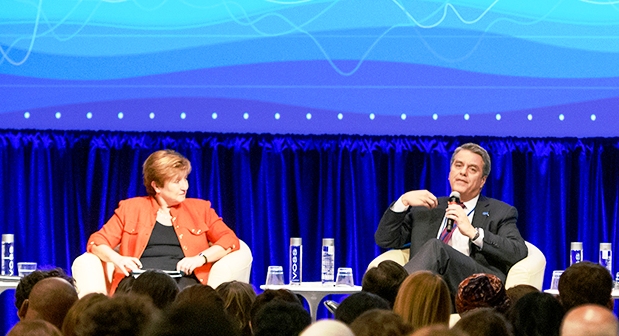 Director-General Roberto Azevêdo joined with IMF Managing Director Christine Lagarde and World Bank CEO Kristalina Georgieva on 10 April to argue for renewed efforts to leverage trade as a force to reduce poverty. DG Azevêdo argued that the current trade tensions could undermine recent progress in tackling poverty. “We cannot afford to go down this path,” he said. The three leaders were speaking at a joint WTO-IMF-World Bank event in Washington DC titled “Beyond Uncertainty: Leveraging Trade to Reduce Poverty”, held alongside the World Bank-IMF Spring meetings.

Director-General Azevêdo said: “Trade has helped to fuel unprecedented growth and development around the world. It has created opportunities for a billion people to lift themselves out of extreme poverty in our lifetimes. However, the current circumstances could put this progress at risk, undercutting the potential of trade to keep changing people’s lives. I could point to three key factors, for example.”

Director-General Azevêdo stated: “First, in a scenario of great uncertainty, the smaller players stand to lose the most. Entering new markets isn’t always easy. It involves investment, information gathering on customs procedures, regulations and many other elements. This is particularly tough for new exporters – and those with the least resources. Heightened uncertainty can raise the level of risk so that following this path is simply not an option. Second, if we were to see a full-blown trade war the spillovers would affect everyone. It would hit global growth and shrink demand, with the poorest economies and the poorest people being the least able to manage this shock. Third, there is a risk that current events will weaken the trading system. The system of rules and disciplines that we have at the WTO is what provides the level playing field on which the poorest economies rely. Without this we would be looking at a scenario of might makes right.”

“Clearly we cannot afford to go down this path. So we’re doing everything we can to ease tensions and find a positive path forward – including by strengthening the multilateral trading system. Despite the current situation, we cannot lose focus of the urgent need to tackle poverty and to deliver on the Sustainable Development Goals. We know that the poorest still face numerous challenges in joining global trade flows. We need to find ways to overcome these challenges and ensure that trade is playing its full role here. I look forward to further developing the partnership between the IMF, World Bank and the WTO to that end,” he added.