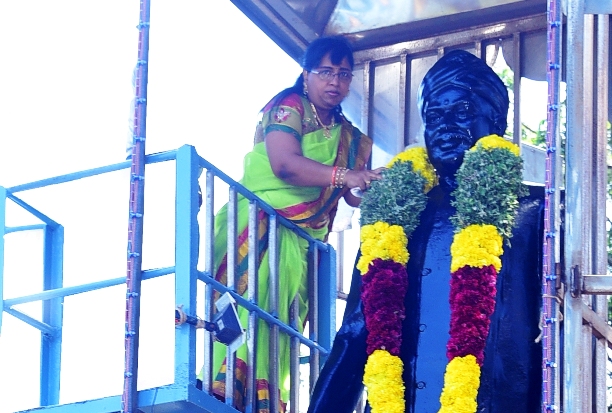 A large number of School children, Teachers and Port Officials participated in the function commemorating the 147th Birth Anniversary of VOC. Port Officers, Union leaders, Port School Teachers and school children paid rich tribute to the Legendary Freedom Fighter. Smt S. Shanthi, Financial Advisor and Chief Accounts Officer, V.O.Chidambaranar Port Trust in her welcome Address recalled the Great Sacrifice made by VOC and his indomitable courage and relentless effort made by him in starting the First Swadesi Shipping Company against the British in 1906 by launching two Steam Ships, S.S.Galieo and S.S.Lavo. Special Invitee, Dr. B. Manivannan, Associate Professor in English, VOC College, Tuticorin delivered an inspirational speech on the life of V.O.Chidambaranar.

He also highlighted his achievements as the Trade Union Leader and narrated his sufferings during his imprisonment by the British. He exhorted the Children to follow the footsteps of the Great Patriot from this Region. Felicitation were offered by DIG B.Venkatesh, Indian Coast Guard & Trustee of VOC Port Trust.