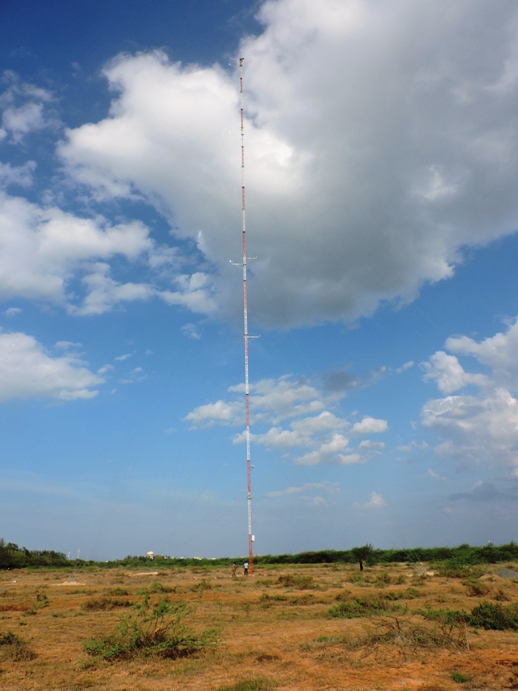 Leveraging the substantial energy savings that can be obtained through rationalisation of operations, adoption of new technologies and use of renewable energy sources, V.O. Chidambaranar Port Trust, Tuticorin, has proposed to install grid connected 25 MW onshore and offshore wind farms at an estimated cost of Rs.125 Crores at Port’s  estate.

So as to identify the feasible locations, capacity of wind turbines to be installed and height at which the wind turbines are to be installed, the key parameters like wind speed, wind direction, temperature, pressure and solar radiation levels have to monitored and analysed for a period of one year.

National Institute of Wind Energy (NIWE), Chennai has been entrusted to carry out the study, for which Port has installed Meteorological masts in two locations at the Port. The meteorological mast has been installed with speed monitoring instruments, wind vanes, temperature sensor, Pyranometer and pressure sensor.

A centralized automatic data logger is installed for data collection and transmission to NIWE, Chennai to analyse the data in realtime. On completion of the study, Port would install the onshore and offshore wind turbines at the identified locations.

The Roof top solar Power plants have been established at various premises of the Port spanning a total area of 5530 Sq.m. with 1779 panels. The average monthly generation from the roof top Solar Power is about 5800 KWh units. The installation of Roof Top Type Solar Power Project have enabled the port management to reduce carbon foot prints to a tune of 476 Metric Tonnes per year.

In addition to the 500 KW rooftop solar power already installed at the Port, orders have been issued to Tamil Nadu Energy Development Agency (TEDA), Chennai for installing 140KW solar roof top power plant at various locations of Port establishments at a value of Rs.76 lakhs. The above project would be commissioned by the first quarter of 2020 and the expected average power generation per year would be Two lakhs units.

It is a matter of pride that during the year 2018, V.O. Chidambaranar Port has been awarded with ‘Roll of Honour’ award by Tamil Nadu Energy Development Agency, Government of Tamil Nadu for the various green initiatives taken by the Port.