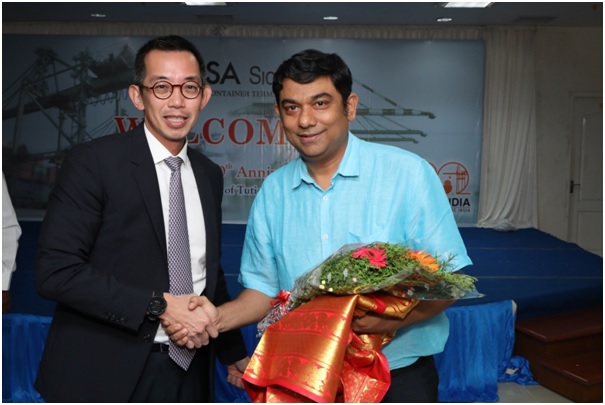 PSA Sical is PSA’s first terminal investment in India and one of India’s first foreign-invested container terminals. Since the signing of the concession on 15 July 1998 and the start of operations in December 1999,PSASical has handled over 7.22 million twenty-foot equivalent units (TEUs), playing a pivotal role in developing maritime trade and the local economy in Tuticorin and Tamil Nadu. PSA Sical also won the ‘Container Handling Terminal of the Year’ award in 2016.

Since then, PSA has gone on to invest in terminals at Chennai (Chennai International Terminals Pvt Limited) in 2007, Kolkata (Bharat Kolkata Container Terminals) in 2014 and its India flagship, Bharat Mumbai Container Terminals (BMCT) in Mumbai which started operations in February 2018.

At a company celebration to mark the occasion, 34 staff who have been with PSA Sical since its inception, as well as from other PSA India companies, were honoured with long service awards. The celebration also included a video message from PSA’s Group CEO, Mr Tan Chong Meng.

On the same day, a trade meet was held for the Tuticorin shipping fraternity, which included V O Chidambaranar Port Trust, the Indian Chamber of Commerce, the National Association of Container Freight Stations and other trade associations, to mark the occasion and thank them for their support. The event was augmented by the participation of Mr Rinkesh Roy, IRTS, Chairman of V.O.Chidambaranar Port Trust, who addressed the gathering.

Present at the ceremony was the Regional CEO for PSA Middle East and South Asia, Mr Wan Chee Foong, who commented, “We are delighted to launch the celebrations for PSA’s 20th year in India here at Tuticorin where it began for us back in 1998. We have come a very long way since then and will continue to play our role in facilitating maritime trade and the local economy. I would like to thank the staff, union, the trade and VOC Port Trust for being alongside PSA throughout the journey from small beginnings to where we are today – we hope to reach even greater heights together.”

Throughout its life, PSA Sical has been a positive influence on the local community. As part of its Corporate Social Responsibility Program, the company arranged a terminal visit on 30 Jun 2018 for the children of the Nesakarangal orphanage located in Tuticorin city. They were taken onboard the vessel “Cape Nemo” that was berthed at Tuticorin Container terminal, followed by a fun quiz session, lunch and also received gifts. PSA Sical staff also organized a Blood Donation Camp on 11 Jul 2018.