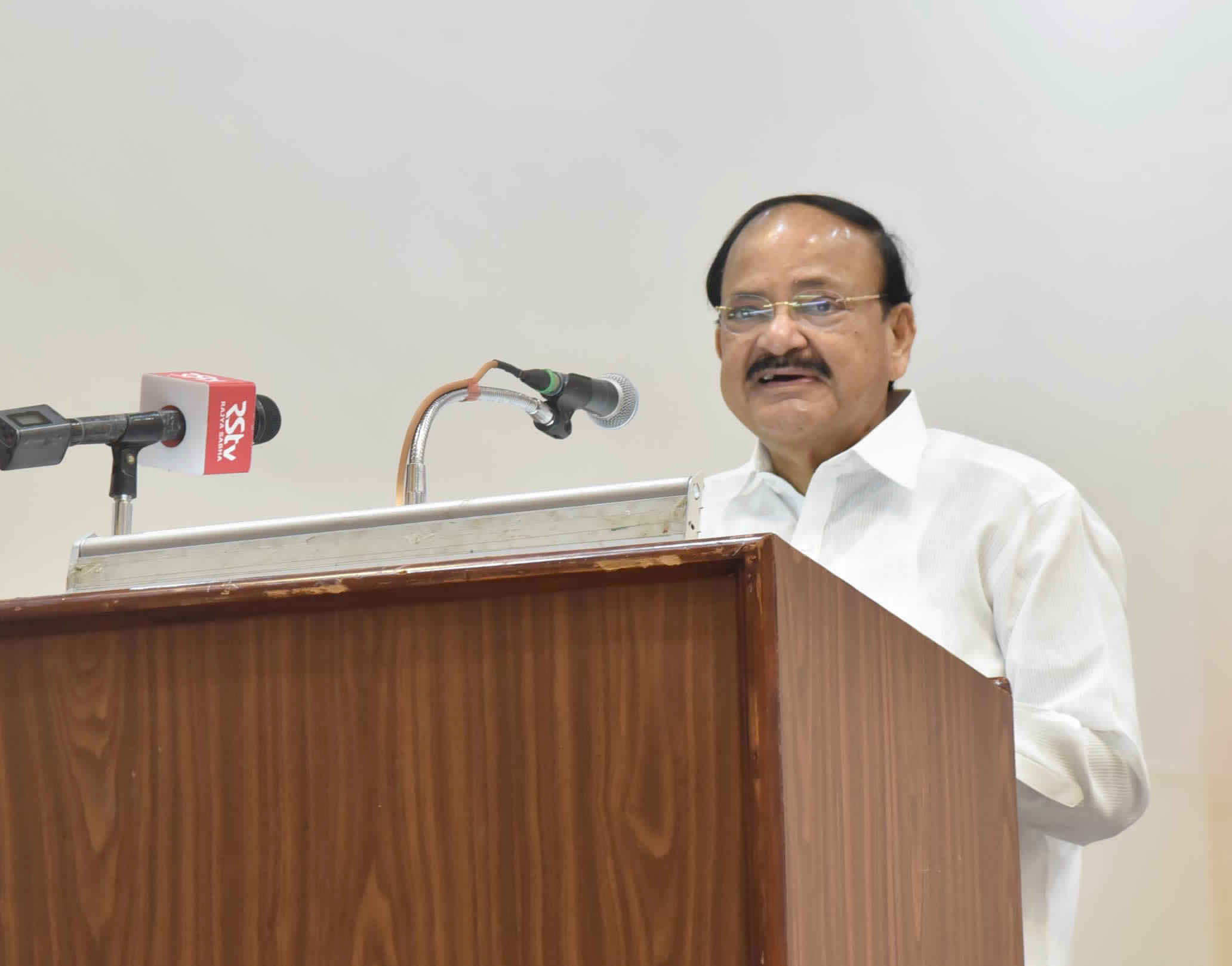 The private sector can play a huge role in accelerating the pace of inclusive development of India, Vice President of India, Shri M. Venkaiah Naidu has said.

He was addressing the Platinum Jubilee Celebrations of the prestigious Tamil Chamber of Commerce and presented the Tamil Chamber & Chozha Naachiar Foundation Exim Awards, in Chennai on 12 October 2018. The Minister for Fisheries and Personnel & Administrative Reforms, Tamil Nadu, Shri D. Jayakumar and other dignitaries were present on the occasion.

The Vice President said that the stalwarts of the Tamil Chamber of Commerce have played a great part in the growth and welfare of commerce and industry while simultaneously extending its arms to help the needy and to ensure the general welfare of the community. He further said that the people of Tamil Nadu are well known for their business acumen and entrepreneurship from as early as the Sangam period of Tamil History. The Tamil epithet, ‘Yadoom Voorey Yavarum Keleer’ meaning, ‘All places are ours, all people are ours’ has been inscribed on the walls of the headquarters of the United Nations in New York, bearing testimony to the cosmopolitan nature of Tamil people, he added.

The Vice President said that the chambers of commerce act as bridges that connect the governments and the industry in creating conducive atmosphere for the businesses to thrive and produce wealth.

Saying the chambers should be conscience keepers of the private sector, the Vice President said that there are a number of areas where the private sector should be mature enough to undertake self regulation. The Chambers must hand hold them into a path of self- responsibility, he said. The Chamber should encourage businesses to be truthful and disciplined and practice restraint and self regulation when it comes to matters such as responsible waste disposal, use of chemicals and pesticides, maintenance of standards in food processing etc, he added.

The Vice President said that the profit should not be the only motive of business and the chamber should also work to make sure that vulnerable sections of the population are given equal opportunities when it comes to business. He further said that the the industry should strive its best to end discrimination especially against women. A woman’s pregnancy simply cannot be grounds for stalling her professional development and it is unethical and inhuman, he added.

The Vice President stressed on the need for the special focus placed upon Micro, small and medium enterprises and cottage industries. Small industries are as crucial as transnational corporations which earn precious foreign exchange are, because they empower the poorest, the weakest, the most vulnerable, he added.

Saying the Chambers of Commerce should encourage the private sector to take up social responsibility, the Vice President said that when corporates become generous, they achieve wonders and Indian corporates do have a history of great generosity of spirit. He also said that Chambers of Commerce  also have to encourage and nurture entrepreneurship and the government of India wants the youth of today to ‘stand up’ on their own two feet. Entrepreneurship makes people job creators and brings about general prosperity, he added.

Shri M. Venkaiah Naidu stated: “The Chamber is organizing EXIM Achievement Awards function in association with Chozha Naachiar Foundation since 2010 and I have to mention here the fact all the awards were given based on merit only with the statistical performance data derived from Customs and Ports. This is a laudable initiative. When I went through the list of awardees, I could not help but notice that most of the awardees are from automotive sectors from Chennai. Chennai is also called the “Detroit of Asia”. There are awardees from Government departments, Customs, Navy, Coast Guard, Public Sectors like Ports and private players like Shipping, Logistics, EXIM trade, container freight station, warehouses, and banks too.”

“We in India, are committed to build a five trillion-dollar economy by 2025, making India the 3rd largest consumer market in the world. This grand dream cannot be achieved until India’s vibrant, dynamic private sector joins hands with the government. The latest report of the World Bank has forecast that the economy is projected to grow at 7.3 per cent in 2018-19 and 7.5 per cent in the next two years,” Shri M. Venkaiah Naidu added.