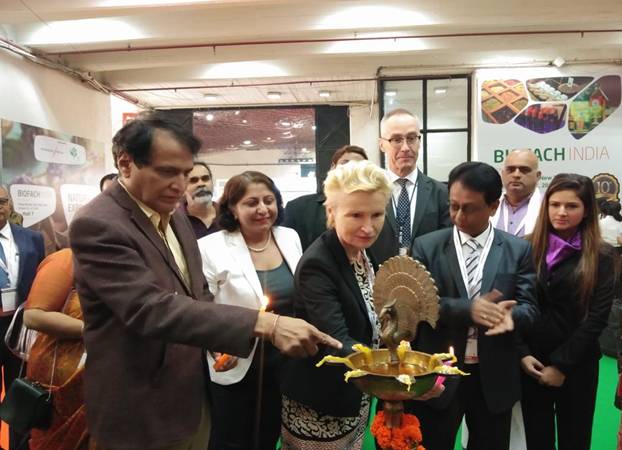 Union Minister of Commerce & Industry and Civil Aviation, Suresh Prabhu said that the Government of India is preparing agro specific zones under the new Agriculture Export Policy which will be unveiled soon.

He was speaking at the inauguration of BIOFACH INDIA which is the world’s largest event on organic industry organized by Agricultural and Processed Food Products Export Development Authority (APEDA) and Indo-German of Commerce in New Delhi on 25 October 2018.

The Commerce Minister said that India produces nearly 600 MT of agri products including horticultural produce and its strategy is to increase farmer’s income by doubling it and reducing the wastage of food products to the bare minimum. Alongside domestic strategy, the Government is also focusing on exporting agricultural products to the world. Suresh Prabhu further said that there is need to cater to the niche market of organic food.

India is bestowed with the potential to produce all varieties of organic produce due to the country’s varied agro climatic regions. India also has the added advantage of inheriting a tradition of organic farming. It is a great advantage for organic producers to tap the market which is growing steadily in both domestic and export markets.

India ranks first in terms of total number of organic producers and 9th in terms of worlds organic agricultural land. The Government of India has implemented the National Programme for Organic Production (NPOP) which is organised by the European Commission and United States Department of Agriculture (USDA). Due to these certifications India’s organic products are accepted by importing countries.

Buyers from 15 countries are participating in the3-day event being held from 25th to 27th October 2018 in New Delhi. This event showcases products like organic aqua culture, cashew, coconuts, tea and cocoa and oil seeds. Buyers-Sellers meet and an international conference are also being held alongside the main event.

In May this year, officials from China inspected rice mills that are capable of exporting non-basmati rice to China and 19 rice mills and processing units were registered for export to China.

During Prime Minister, Narendra Modi’s, visit to China, in June this year, an MoU was signed between China’s General Administration of Customs and India’s Department of Agriculture on phytosanitary requirements for exporting rice from India to China. The 2006 protocol on phytosanitary requirements was amended to include the export of non-basmati varieties of rice from India.

China is the world’s largest producer and importer of rice and buys more than 5 MT/year. There is potential for India to export 1 MT of rice to China in a few years.India’s total rice exports increased from 10.8 MT a year earlier to 12.7 MT last fiscal. This allowed India to retain the top slot in global trade of the commodity.

China has imposed tariffs of 25% on a list of American products including rapeseed meal and soybean meal in July this year and has removed tariffs on these products from five Asian countries including India. India is keen to export agri products like rice and sugar to China in order to bridge widening trade deficit.