INDIA, EU Has Potential To Enhance Bilateral Trade To USD 200 Billion By 2022 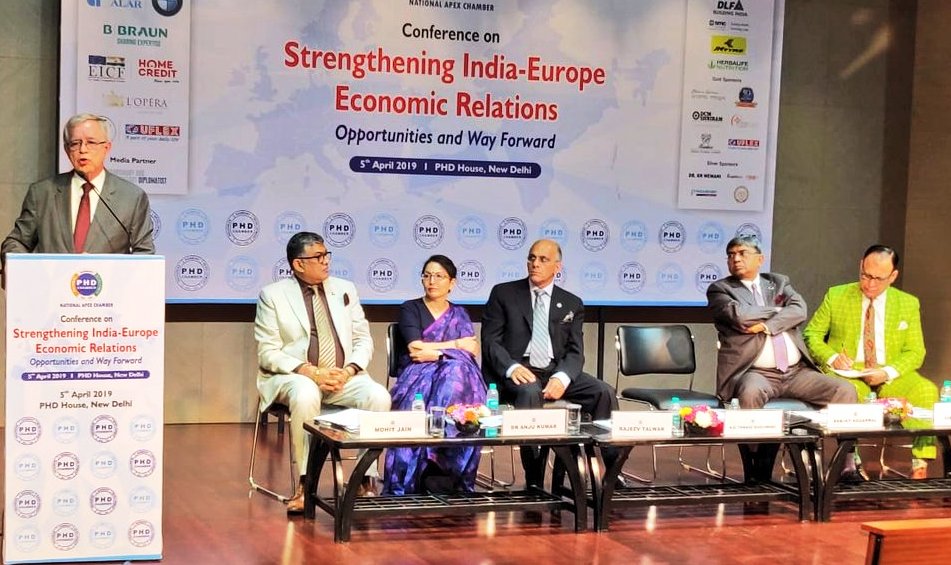 Enhanced trade facilitation and lower tariffs between India and EU have potential to boost bilateral trade from USD 141 billion (2017-18) to USD 200 billion by 2022, said Industry Body PHD Chamber of Commerce and Industry in a press statement issued here on 5 April 2019.

While appreciating the strong bilateral relations between India and EU, Mr Rajeev Talwar, President, PHD Chamber of Commerce and Industry emphasised on making India an ideal place for setting up defence manufacturing centres and research and development units by foreign companies given its huge market and trade potential.

Mr. Tomasz Kozlowski, Ambassador of the EU to India said that the trade between India and Europe could grow manifold with an early conclusion of India –EU FTA and investment protection agreement well in time.

Trade facilitation measures along with trade reforms for goods and services coming to India from EU should be promoted to make sure that its ‘Make-in-India’ slogan evolves for “Make for World” also, he said.

Mr. Kozlowski opined that India and EU should work in close partnership for emerging and rule based global economic order with the spirit of multilateralism in various fora and particularly so in G-20 and World Trade Organization (WTO) to reshape and rebuild the emerging global economic order.

India enjoys robust relations with both EU and UK, in this scenario, BREXIT is unlikely to make any adverse impact on India’s economic and trade relations with the two, said Dr Anju Kumar, Joint Secretary (Central Europe), Ministry of External Affairs, Government of India.