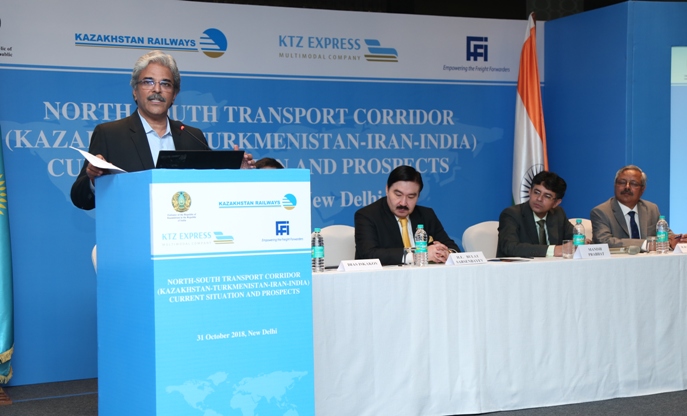 Moderating the Round Table, Mr Shah suggested Indian freight forwarders/logistics companies as well as logistics company representatives from Kazakhstan, Turkmenistan and Iran to utilize this platform for expansion of their horizon by exchanging thoughts on mutual requirements. Commending the Government of India initiatives Mr Shah reiterated FFFAI’s firm commitment to make the INSTC project a real success. He also appealed to Indian companies to study and explore opportunities and new avenues of forwarding and logistics business on the highly potential Kazakhstan-Turkmenistan-Iran-India route.

“The main purpose of the event is to inform the Indian business community about the logistical capabilities of the Eastern branch of the “North-South Transit Corridor” and to attract Indian business circles to the wider use of this route,” said Mr Bulat. At present Kazakhstan-India trade turnover is about $ 1 billion and he expected it to increase to manifold. Mr Bulat highlighted the recent visit of Prime Minister Narendra Modi to Kazakhstan and signing the agreement between India and Kazakhstan on a renewed long-term supply of natural uranium and a railway cooperation agreement to boost bilateral trade.

It is expected that the wide use of this transport route will significantly reduce the time of cargo delivery and, accordingly, increase the trade turnover between the two countries by two or three times.

In his speech, Mr Prabhat underlined the collaborative efforts from the Government of India and industry stakeholders. “FFFAI has done commendable job to promote INSTC as viable one. Thanks to our long relationship with Kazakhstan and other INSTC countries, it is for sure that there would be a spurt in trade and logistics business transaction, when this route takes it final shape in the near future,” he said.

Mr Shinde, who is spearheading the INSTC project from FFFAI, pointed out immense potential of this route and at the same time some inherent and yet unresolved challenges including customs clearance and connectivity. “These challenges need to be addressed at the earliest to promote INSTC at large as a lucrative transport corridor, which would save logistics cost and transit time significantly,” he added.

Mr Ramakrishna shared that FFFAI would organize a number of events in the months to come across India to promote INSTC route as well as associated countries.