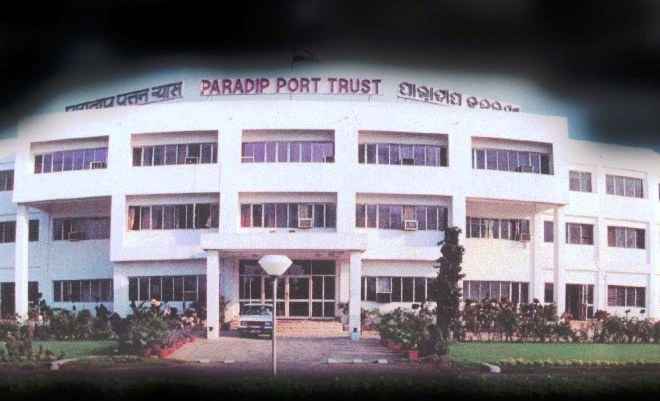 Paradip Port, one of the promising ports in the country and located in Odisha, has once again repeated the feat of handling 100 Million Metric Tonnes (MMT) of cargo for 2nd fiscal year in succession.

With another two weeks to go, the Port is likely to handle 110 MMT targeted cargo set by the Ministry of Shipping for the FY-2018-19.

With record cargo handling of 100.12 MMT during the fiscal year 2017-18, PPT has joined the “Exclusive Club of Ports”, which have handled 100 MMT or more cargo in a fiscal.

In the year 1819, the British constructed a sort of a harbour at north of the present Paradip site, then called False Point. In I862, the East India Irrigation Company explored the potential utility of Paradip for transportation of rice from the area due to non availability of road transportation. The importance of Paradip grew more during the great famine of 1866, when it was used as the main entry point for import of food materials to the famine struck area.

During early post-independent period, a minor port came into existence at Paradip in 1958 by the efforts of the State Government. Subsequently, the Government decided to construct a major port there. Paradip is one of the major ports of India. The then Chief Minister of Odisha late Biju Patnaik is the founding father of Paradip Port. The then Prime Minister of India, Pandit Jawaharlal Nehru laid the foundation stone of the Port on 3rd January 1962 near the confluence of the river Mahanadi and the Bay of Bengal.

INS ‘Investigator’ had the privilege of maiden berthing in the port on the March 12, 1966. On the same day the Port was declared open by the then Yogoslavia Prime Minister Peter Stambolic. On April 18, 1966, the Union India declared Paradip Port as the 8th Major Port of India, making it the first major port in the east coast commissioned after independence. To commemorate the day, Paradip Port Trust (PPT) has been celebrating 3rd January as the Port Foundation Day every year since then.

The achievement of 100 MMT cargo handling in consecutive two years shows the commitment of the Port towards its customers and the country as a whole. In the process of handling 100.04 MMT cargo as on 05.03.2019, the Port has achieved a growth rate of 5.86% over the corresponding period of 2017-18 when the Port had handled about 94.5 MMT.

The achievement of 100 MMT of cargo again by PPT in the current fiscal is despite 2 of its existing berths are not available for handling of cargo and are under mechanization process.

The growth saga is part of conscious strategy under the Sagarmala Programme of Ministry of Shipping, as the port has achieved remarkable 50% growth within last 5 years. Paradip Port sees more opportunities ahead due to the much anticipated connectivity in the vicinity and launching of the industrial zone.