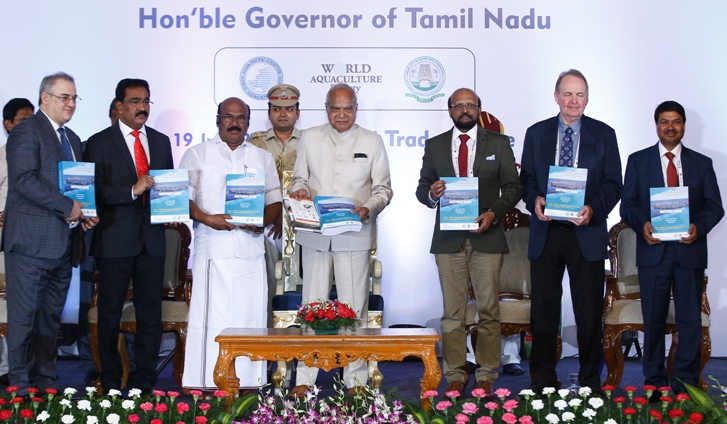 It is an annual event of WAS-APC, which for the very first time conducted at Chennai. WAS is an international voluntary organization celebrating its golden jubilee year of establishment for overall aquaculture development across nations by bringing together scientists, farmers, industrialists, policy makers, input suppliers, exporters, etc for knowledge and experience sharing. It has five chapters – Asian Pacific Chapter, Caribbean and Latin American Chapter, Korean chapter, African Chapter and the USA home chapter.

Among these five, the Asian Pacific Chapter (WAS-APC) has the maximum number of members. Prof.S.Felix, the Vice-chancellor of TNJFU, Nagapattinam is the present president of the WAS-APC. He is the first Indian to become the President of the WAS-APC. It has taken almost two years to plan ‘APA-19’, ensuring participation of 3500 fisheries and aquaculture professionals which includes 1000 persons from 75 countries.

Inauguration of this mega event happened on 19 June 2019 at the conference venue, in which Prof. S. Felix, Vice-chancellor, TNJFU and President, WAS-APC, welcomed the gathering by introducing the theme of APA’19.

Theng Dar Teng, Ambassador to the Sultanate of Oman and Shri. Tarun Shridhar, I.A.S, Secretary to the Department of Animal Husbandry, Dairying and Fisheries, were the plenary speakers in the opening ceremony.

Prof. P. Natarajan (Hawassa University, Ethiopia), Society for Advancement in Biological Sciences, Bengaluru red out the citation of the “Padmashree Prof. N. Balakrishnan Nair Environmental Excellence Award” which was conferred by the chief guest of the ceremony, Governor of Tamil Nadu and the Chancellor of the University, Thiru. BanwarilalPurohit to Prof. S. Felix, Vice-chancellor of TNJFU, Nagapattinam& President of WAS-APC.

The chief guest then released three books in advanced topics of aquaculture and delivered his chief guest address. Dr.Farshad Shishehchian, International Co-Chair, APA’19 delivered the vote of thanks. The chief guest in the presence of all the aforesaid dignitaries inaugurated the international trade show. The trade show is having 225 stalls displaying the modern technologies, aquaculture inputs, modern machines, feeds, fish medicines, fish products, etc. Among the 225 stalls, 200 are being exhibited by foreign companies.

Immediate after the inauguration, NFDB sponsored farmers meet was conducted wherein 200 fish/shrimp farmers were addressed by policy makers and international experts to provide solutions and guidance to the problems faced by the farmers. In addition, 12th International Symposium on Tilapia in Aquaculture (ISTA) was also conducted as one of the key parallel session. From the received 1000 research paper abstracts, the day one of the conference concluded with 172 oral presentations in 25 parallel sessions and 400 poster presentations in 25 parallel sessions dealing with various advanced topics in aquaculture. In total, there will be 12 Industry sponsored sessions organized by companies engaged in aquaculture. These things will surely be a great benefit for the aqua farmers and fisheries professionals of this country.

“The annual fisheries and aquaculture production in India is about 12 million tonnes. The country now enjoys the second position in the world after China with regard to fisheries and aquaculture production,” he said at the inaugural ceremony of the International conference on “Asian Pacific Aqua Culture 2019” at the Chennai Trade Centre, according to a report in The Hindu.

Mr. Purohit said that inland fisheries accounts for 66.81% of the fish production in the country. “Consequently, freshwater aquaculture, which had a share of only 34% in inland fisheries in mid-1980s, has gone up to about 80% in recent years,” he added.

He said Tamil Nadu, which has the second longest coastline among Indian States, houses more than 10 lakh fishermen. “The State has taken a number of steps to promote both marine and inland fisheries and I am sure that with the assistance of the organisers of today’s function many more innovative suggestions will be available for implementation so as to promote the welfare of the fishermen of the state,” he said.

Jayakumar, Minister for Fisheries and Personnel and Administrative Reforms, Tamil Nadu and Pro-Chancellor of TNJFU, said the State government had been taking a number of steps such as promoting deep-sea fishing and seamless communication system to ensure safety and security fishermen. The State planned to increase fish production by three times to 5.92 lakh tonnes from 1.97 lakh tonnes.