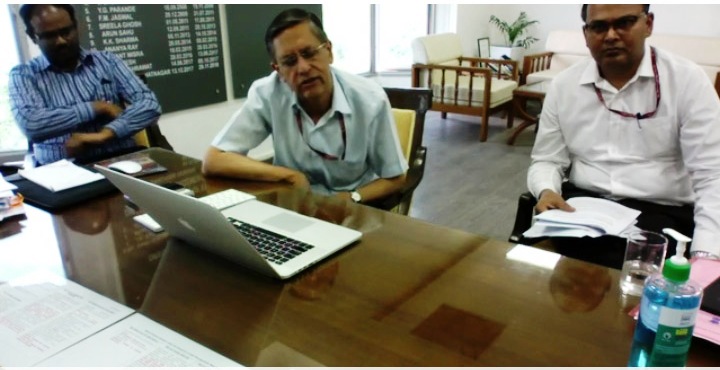 The DG Systems of Customs, Government of India, recently unveiled a slew of further initiatives that the department going to implement soon to facilitate trade through digitization and Public Private Partnership (PPP), in view of the challenges due to ongoing COVID-19 pandemic and lockdown/curfew. In this Webinar on “Digital Transformation through Paperless Initiatives in Customs Clearance” FFFAI also presented several recommendations before the Customs authority, so that cargo clearance streamlined despite challenges.

Speaking at this interactive webinar, Mr Sandeep Kumar, DG Systems, Government of India, emphasized the need of achieving transparent process in Customs Clearance which will help to enhance security and revenue of the country.

Mr Kumar called on FFFAI Chairman Mr AV Vijaykumar in this webinar to work on blockchain technology for achieving the centralized KYC and also to achieve further uniformity in various processes involved in customs clearance of exim cargo.

FFFAI team which was represented by Mr Vijaykumar and BCBA President Mr Karunakar Shetty, along with Mr Shankar Shinde, Chairman-Elect; Mr S Ramakrishna, Immediate Past Chairman and Dushyant Mulani, Honorary Secretary addressed the following issues which were collated from 28 FFFAI Member associations across the country:

While accepting the recommendations from DG Systems regarding creation of blockchain to work on creation of a centralized database of all the importers and exporters Mr Vijaykumar conveyed that FFFAI with its outreach to every nook and corner of the country is geared up for creating the centralized KYC database of importers and exporters transacting through Customs, which will help to create a secure working environment.

Mr Shetty complimented DG Systems and CBIC for their progressive steps, which has helped to keep in critical supply chain moving in the country in spite of challenges faced due to COVID-19 pandemic, lack of transport not being available, etc. He further said that CBs and frontline workers have braved against all odds and have ensured that customs clearance have taken place through ports, airports, ICDs, etc for supply of essential goods to India citizens.

Mr Anupam Prakash, EDG, Systems along with Mr Kshitij Jain, Joint Commissioner, Systems unveiled future endeavour of the Directorate of Systems by carrying out various upgradation in the system which will result in high degree of paperless transaction. He explained the recent online module which has been introduced for carrying out import clearance further. He also conveyed that similar module is being worked out for export with lot of features like import side.

Mr Ramakrishna suggested that the centralized KYC with signature verification through the banker of EXIM trade would enhance the security. FFFAI have already given a proposal to the Ministry of Finance and Ministry of Commerce in this regard. It was also suggested that similar to import and LEO documents if it is sent in PDF format along with copy to shipping line and load port the TR-1 and TR-2 can be done away with. Registration of goods should be immediately after the entry of goods in Customs area along with uploading with Annexure-C is also recommended for minimizing handling of export goods.

Supplementing Mr Ramakrishna, Mr Mulani highlighted some other important points given below.

Auto monitoring and escalation mechanism to check the pendency in import Bill of Entries and export Shipping Bills: FFFAI suggested that for better monitoring of pendency for assessment and examination, the Customs EDI system software should be designed in a manner so that if a particular document is pending for more than 3 hours, there should be automatic alert to the senior officer i.e Addl. Commissioner of Customs and Commissioner of Customs in charge of that section.   Alternately if the Bill of entry/ shipping bill is not getting assessed or examined within stipulated hours, say 3 hours, the same should be released by facilitating under RMS.

Duplication of manual process to be avoided while executing bonds with Customs: FFFAI suggested that there should be provision created in the EDI system, wherein, when a Bond is submitted, at the time of filing the Bill of Entry with Customs, the same should get automatically debited and the duplication of process which is prevalent at present, besides manual process, should be avoided.

LEO time and date required to be mentioned on Shipping Bills: As being done on import side, FFFAI requested that the Export module in ICEGATE should also specifically mention exact time of each activity from submission to LEO such as Assessment, DC Release, Registration of Documents for LEO, Query reply in the same manner of imports and Feeding examination report and LEO.

FFFAI also recommended that CTD declaration for transit cargo should be brought under EDI instead of manual at present.

The meeting ended with questions from participants related to issues faced during lockdown and on how the steps taken by directorate of System would be helpful for the industry.

Mr Vijaykumar and Mr Sandeep Kumar summed up the session by stating that the number of steps undertaken by CBIC and DG System would help the trade and industry to handle higher volumes after the lockdown is over.

In his thank giving note Mr Shankar Shinde, Chairman-Elect, FFFAI expressed gratitude to Customs for their trade-friendly initiatives to facilitate trade on technology platform to expedite customs clearances of cargo shipment going paperless and avoid human interaction, especially at this challenging time because of COVID-19 pandemic. He further maintained that the trade would be immensely benefited by the DG System, Mr Sandeep Kumar’s new initiatives to offer a digital interactive platform.

“It had been good experience and knowing Mr. Sandeep Kumar and was pleasure working and experiencing his thought process during facilitation of cross borders International Customs integration on ATA/ TIR Carnet.

He thanked Mr. Anupam Prakash for sharing development and experience. He has always been helpful and available to trade to resolve difficulties. In addition, Mr Shinde thanked Mr. Kshitij Jain who shared the latest developments on ICEGATE facility available to Customs Brokers and the process being undertaken for further development on ICES customs system.

He also thanked Mr Vijaykumar, Mr Shetty and Mr. Mulani for initiatives taken to conceptualize and organize the event.  Further, he thanked to the Presidents of FFFAI Member Association and EC Members for providing valuable inputs to make effective presentation to DG System for implementation and requested all to adopt to the new technology changes for future survival and growth.