Mrs.Sunitha  Nautiyal wife of ADG KR  Nautiyal on 28th Aug 18 launched Offshore Patrol Vessel (OPV) Yard 45003 at  L&T Shipyard, Kattupalli.  It is an auspicious moment for launching a seagoing vessel, as the ship touches water for the first time, where she has to spend the rest of her life.  Additional Director General KR Nautiyal, Coast Guard Commander (Eastern Seaboard) was the Chief Guest for the launching ceremony.

In his address, Mr.Nautiyal said, the Defence made a contract with L&T in 2015 to supply seven Offshore Patrol Vessel. They already launched two vessels named “ Vijaya” and “Vikram”. The third vessel which is being launched named as “Veera”. The history of our country speaks about the capability of building the ship by Mauriya, Chola, Vijayanagara Dynasty. During the British period, the changes in Technology created developed vessels using steels and now India started its own technology under ‘Make In India’ policy  to build ships with modern facilities like communication equipment, Radar, powerful engine, helicopter for more surveillance and rescue capacity and if the vessel once filled with fuel, it can make two to three trips between Port Blair and Chennai. He appreciated L & T for their capability in building the ship with the latest technology. Also, he welcomed feedback from captains and crews for further development.

The OPV launched is the third of series of the 07 OPVs under construction by  M/s L&T Shipbuilding Ltd against contract signed between Ministry of Defence and  L&T shipyard on 30 Mar 2015.  This OPV has been indigenously designed and being built first time for ICG by a private yard, M/s Larsen and Toubro Shipbuilding Ltd at Kattupalli.  The third OPV launched today is likely to be inducted into Indian Coast Guard in Mar 19 after completion of extensive trials on fitting equipment and machineries.  The subsequent OPVs will be delivered after a span of six months period between    each OPV.

The length of the OPVs is 98 Mtrs and breadth is 14.8 Mtrs with a gross tonnage of 2100 tons.  The endurance of the vessel is 5000 nautical miles at cruising speed.    The cruising speed of the ship is 12-14 knots which can be raised to a maximum speed of   26 knots with 100% propulsion.  The ship is fitted with 02 diesel driven engines of    9000 kW each with low-level consumption, high TBO and complying to IMO tier-II norms.   The ship is fitted with one number 30 mm automatic gun with Fire Control System (FCS) and two numbers 12.7 mm gun with FCS.  The ship is also equipped with Integral Twin Engine Helicopter which will enhance its operational, surveillance, search and rescue capability.

The OPVs would be utilised for day and night patrol/surveillance along with anti-terrorist / anti-smuggling operations in the Exclusive Economic Zone (EEZ) and coastal security.  These vessels are equipped with two COTS Radars and ultra-modern technology including sophisticated navigational and latest communication system which are capable of operating in tropical conditions.  The expected lifespan of the ship is more than 25 years.  The ship would be manned by 102 crew, including 14 officer and 88 Subordinate Officers and enrolled personnel.

Mr.Kannan, Managing Director of L&T S has explained how they keep a schedule in delivering vessels and the fourth vessel is under construction.

The Chief Guest pointed out that the Indian Coast Guard is in the process of expansion to meet out the growing need of a large number of state of art ships and aircraft to strengthen the maritime security mechanism in the emerging security scenario. 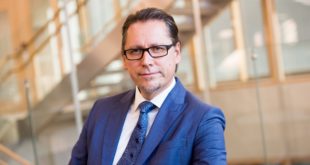