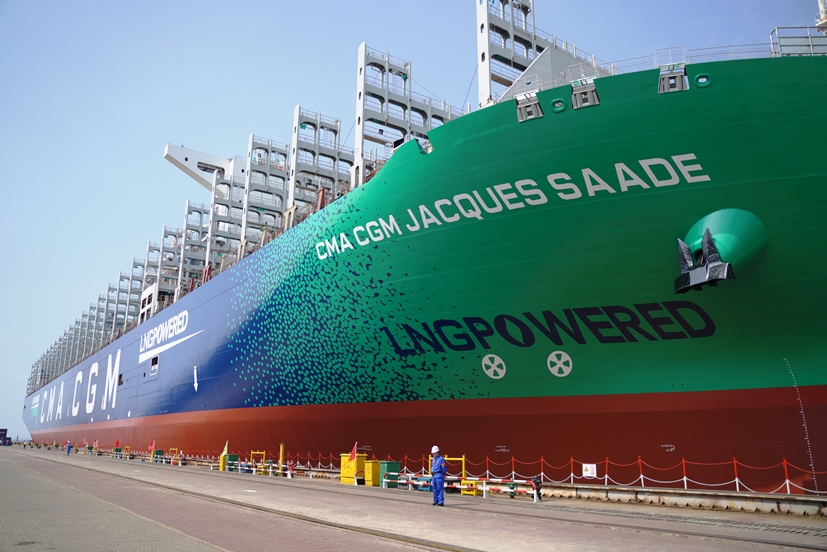 The CMA CGM JACQUES SAADE has joined CMA CGM Group’s fleet thus becoming the largest LNG-powered container ship in the world. A global leader in shipping and logistics, CMA CGM has made the symbolic choice of naming its new flagship after its founder, Jacques Saadé, a visionary and entrepreneur.

A unique naming ceremony for a unique ship

The joining of the fleet of the CMA CGM Jacques Saadé was marked by a first-of-its-kind digital naming ceremony that saw the shipyard’s representatives in Shanghai and CMA CGM Group’s management in Marseille share an emotional landmark moment in their common history. Blessed by father Francis Fang, the vessel was then officially named by her Godmother, Tanya Saadé Zeenny, who wished the ship, the captain and its crew the best of luck on their future voyages with the traditional words “May God bless this ship and all who will sail on her”.

In November of 2017, Rodolphe Saadé, CMA CGM Group’s Chairman and Chief Executive Officer, decided to equip this series of container ships with LNG-powered engines – a first in the history of shipping for Ultra Large Container Vessels. The CMA CGM Group has thereby proven its commitment towards driving forward maritime transport’s energy transition.

Today, LNG is the most advanced solution when it comes to preserving air quality. It enables a 99% reduction in sulfur dioxide and fine particle emissions, and an 85% reduction in nitrogen dioxide emissions, going well above and beyond existing regulation. LNG emits up to 20% less CO2 compared to fuel motorization. This technology is one of the first step towards achieving CMA CGM Group’s ambitious 2050 objective of carbon neutrality.

Innovation-packed vessels, the result of 7 years of research and development from CMA CGM experts

These nine vessels are packed with innovations, the result of a long cooperation between CMA CGM’s research and development experts and industrial partners.

In addition to LNG motorization, the vessels offer advanced technologies:

-The cockpit boasts the latest embedded digital technologies to assist the commander and crew, in particular for port maneuvers;

-They feature a redesigned straight bow with an integrated bulb, a redesigned rudder, and a redesigned propeller all of which substantially improve the vessels hydrodynamics, thereby reducing energy consumption.

These 9 vessels bear a specific “LNG Powered” label that will be recognizable on all seas across the globe.

From its design all the way to its operation, without forgetting its construction, The CMA CGM JACQUES SAADE benefited from the know-how and expertise of the best French, European, and global industry leaders. A number of specialized companies played their parts in this landmark construction project, including:

The CMA CGM JACQUES SAADE, along with its eight 23 000 TEU sister ships (twenty-foot equivalent unit) will be registered at the French International Register (FIR). They will bear the names of landmark Parisian monuments and other renowned venues and institutions from throughout the French capital (Champs Elysées, Palais Royal, Louvre, Rivoli, Montmartre, Concorde, Trocadéro, and Sorbonne). CMA CGM has chosen Total as part of a major industrial partnership to supply them with gas. Thereby making CMA CGM the initiator in structuring a genuine LNG field of excellence in maritime transport.

The CMA CGM JACQUES SAADE will start its maiden voyage as of September 23rd on the French Asia Line (FAL), CMA CGM Group’s most emblematic line between Asia and Northern Europe. Its rotation will lead it to the ports of Pusan in South Korea; Tianjin, Ningbo, Shanghai and Yantian, China; Singapore; Southampton, Dunkirk, Hamburg, Rotterdam, Algeciras in Europe; and Port Kelang in Malaysia. This line provides a weekly service comprising 13 calls over the course of 84 days.

On the occasion of the CMA CGM JACQUES SAADE’s coming into service, Rodolphe Saadé, Chairman and Chief Executive Officer, declared: “The CMA CGM Jacques Saadé embodies our commitment to the planet. This vessel has been enhanced with the latest technologies and is the result of 7 years of research and development. While guaranteeing the safety of our crew, it preserves air quality and will be part of our fight against global warming. It significantly improves the environmental footprint of carried goods. We have taken a big step forward. We need to go further to build transport that is even more respectful of the environment.” 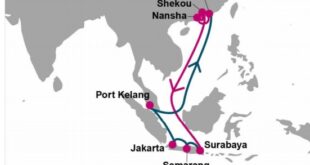 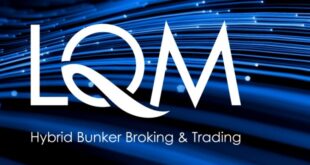