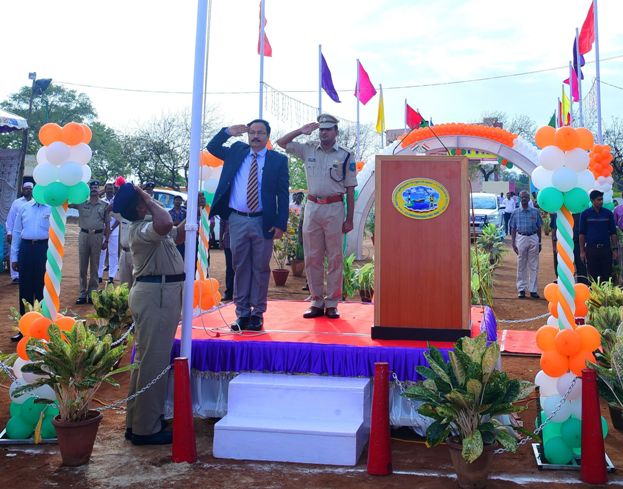 The celebrations to mark the 73rd Independence Day of India commenced with the hoisting of the national flag by Shri T.K. Ramachandran, IAS., Chairman, V.O. Chidambaranar Port Trust. Thereafter, he took salute from CISF, Port Fire Service and NCC students of Port Schools.

In his Independence Day message, the Chairman recalled the struggles and sufferings of the forefathers and patriots who had contributed to attain freedom for the Nation and requested all to contribute their mite to take the nation to achieve economic development. He also congratulated all the Trustees, Port users, Union Leaders, Employees, District Administration and all stakeholders for helping the Port to handle 11.71 Million Tonnes of cargo and achieve a growth of 2% during this financial year up July 2019.

He also stated that the future-oriented V.O. Chidambaranar Port has embarked on a massive inner harbor optimization projects like Dredging the Channel to a depth of 16.70 metres and Dock basin to a depth of 16.10 meters, Widening of the Port’s entrance channel from 153 metres to 230 metres and Conversion of Berth No.9 as Container Terminal facilitating the Port to grow from the status of container feeder Port to Transshipment Hub & Gateway Port for mainline vessels. As a part of Sagarmala initiative, the Port has identified 702 acres of Port land for development of Coastal Employment Unit in which food processing, Garments, machinery and other export oriented industries can be developed. The Coastal Employment Unit would increase economic activity creating employment opportunity of over 8000 jobs and generate additional cargo throughput of around one Million Tons per annum.

The Chairman distributed meritorious awards to the Port School children and Teachers for their excellence in academic performances. The School children performed Cultural Programmes.