Breakthrough for Liquefied Natural Gas at Port of Gothenburg

Liquefied natural gas (LNG) has arrived at the Port of Gothenburg and is set to stay. The first bunkering of a ship with LNG whilst it was loading took place on 27 October. Less than a month ago, the port saw the very first ship-to-ship bunkering of LNG at the quayside.

Bunkering of LNG has in the last few weeks alone become a regular part of operations at the Port of Gothenburg, and thanks to the application of carefully planned instructions and routines it has gathered momentum.

On 27 October, the Port witnessed the first bunkering of a ship at the premises whilst it was loading. Earlier in October, it saw the first ship-to-ship bunkering of LNG at the quayside. Two very important milestones for LNG bunkering in just a few weeks.

In the interim, five ships bunkered whilst they were at anchor just outside the port. The newly constructed bunker and distribution vessel Coralius is operating in the area, and the LNG is supplied by Skangas.

Dan-Erik Andersson, Gothenburg Port Authority Operations Manager at the Energy Port, said, “Even 5-10 years ago the idea of ships running on liquefied natural gas would have almost been regarded as science fiction. Now we have had seven LNG-bunkerings here in less than a month. It would be no exaggeration to describe this as a major breakthrough.”

The EU Alternative Fuels Infrastructure Directive states that it should be possible to bunker LNG at what are termed Sweden’s core ports (Luleå, Gothenburg, Stockholm, Copenhagen/Malmö and Trelleborg) before 2025. The Port of Gothenburg has already realised this ambition in full, and is the only port to do so.

According to Dan-Erik Andersson, this is the outcome of a number of key factors, coupled with effective collaboration between various companies and organisations. 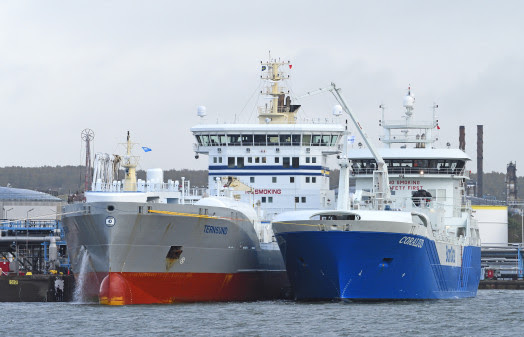 “This development has been driven from different directions. We have shipping companies and energy producers that have had the foresight to invest responsibly in the long term, as well as public agencies that have been compliant with regard to the regulatory framework. The Sulphur Directive introduced in 2015 has spurred us on, and at the Gothenburg Port Authority we have offered incentives in the form of fuel transition discounts and other financial inducements.”

Ever since LNG has become more commonplace at the Port of Gothenburg, with an increase in the number of calls and efficient handling systems and routines, things are continuing to move forward with further bunkering options on the horizon. Next year, Swedegas will build a landside pipeline for LNG at the Energy Port in Gothenburg. The investment will also mark the starting point for the construction in stages of a larger facility that will supply both the transport sector and Swedish industry with liquefied gas.